So, uh, I posted that last post and was sitting with my melancholy (something not at all new to me). I got that urge to share it and see if solidarity or sympathy would help.

Nearly 15 years ago I was 9 and wanted a dog more than anything. My family had tried once with a big rescue dog (Great Dane/German Shepherd/Labrador mix) named Drew Bledsoe; I loved him dearly and he listened to me but it hadn't worked with the family. It broke my heart.

Come Christmastime I walked into this little side-room (then the play-room, now the guest bedroom/television room in which I currently reside) and found a little green dog cage. There was a board with pictures of pug puppies; I discovered that one was to be mine. I was to have a pug puppy of my very own! A little friend just for me!

We all packed up into the minivan (mother was absolutely a soccer-mom) and headed over to the breeder's house. I was brought to a pen filled with wriggling, wrinkled little things that huffled and puffled and whuffled as they moved. I plunked down in the pen and gazed around at them.

There was one that caught my eye. He wasn't the fastest, or the most graceful, or even particularly the very cutest one. But he was working his damndest to get over to me, his hind legs spread out behind him as his front legs pulled him forward; in the years to come I would call that his "camel walk" for no apparent reason.

He reached me and huffled triumphantly up at me. He was the softest, warmest little bundle I'd ever held. I picked him up with the greatest care and knew, in that instant, that I was his. I toyed about with the other puglettes but came back to him every time.

I didn't get to take him home until January. I headed over with one of my childhood best friends from church and my family. We picked him up and I carried him to his new home cuddled onto a pillow in my lap. That night Quackie (the friend) and I put the pillow in an old rolling suitcase of mine that was small enough, with the pillow, to act as a dog bed. He curled up in the makeshift bed; his tail uncurled and soon enough he was snoring.

As he grew I taught him the important things: how to play rough (with a sock on my hand); how to play fetch (by throwing socks, as he never cared much for sticks); how to take up as much space in bed as he could despite being little (I was rather good at that); how to sleep in; how to follow ordinary obedience (my family helped there); how to perform "paw" and charm a treat out of almost anyone. He taught me how to come out of my shell a little, how to love with everything I had, how to cry when health was a concern (for him and for me and for others), how to properly value food, how to bark excitedly when we saw familiar places from the car, how to be smelly and old and above all happy.

Almost everyone I met loved my little pugster, even if they were otherwise not fond (or afraid) of other dogs. He could get an "awwwr!" out of just about anyone. He was the ultimate lap-dog and companion; he hardly ever left my side. Followed me from room to room, he did, and always cuddled up close. Slept with me nearly every single night we were in the same house together.

Good gods, I miss him. My little boy. It's not guilt I feel over not being there to say goodbye, or not saying a proper goodbye before it happened; I am selfishly sad about it for myself. He didn't need me there, although he would have noticed me; he was comfortable with those around him and his last action was to wag his tail and attempt to get up. It wasn't as if I was there precisely at his birth, so it wasn't necessary for anything cyclical.

But I would have liked it and I'm always going to hate that I didn't have it. I had either just finished or was about to finish a petsitting gig; I intended to spend the whole weekend with my dog, finally, and bring him down to Providence for the first time. I didn't get to. Life happens. Plans sometimes don't.

And the way I'll remember him, ever as fond of unicorns and rainbows cuddling and beds as I am: 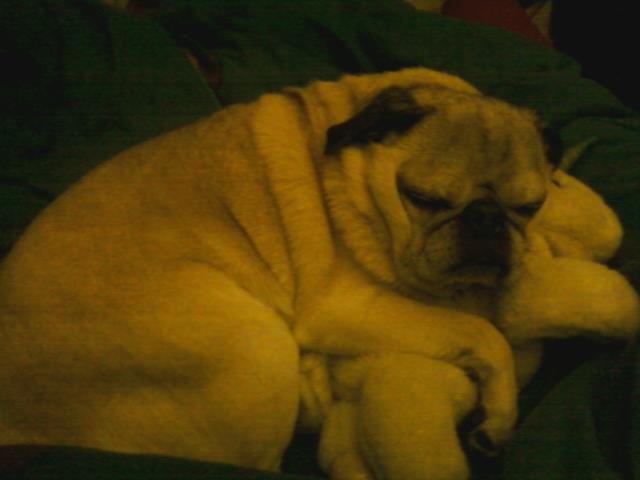 There are more elsewhere; one of these days I'll properly go through all my pictures and find the Mugz ones. I'd like to make a binder of them for the future.

I miss you, Mugz-pugz Muggle-puggle Moog-poog, my big little guy. Sleeping here isn't the same without you, nor is life. I wish I'd had a few last moments to properly say goodbye before the accident, or been there to wish you off across the rainbow bridge. I'll be keeping you with me.

Thanks for choosing me. I can't imagine growing up as anyone else's human. I think you trained me pretty well in all those years.

You know my flip-floppy beliefs after years of my mumbling theology late at night, but if reincarnation of any sort does happen to be the deal and you take up anew, please consider finding me again. It's a selfish request, I know: there are plenty out there who could do with a soft soul like yours, one that does so much good. But I wouldn't mind spending another lifetime with you if you wouldn't. I've got plenty of good warm fuzzy socks, a tortoise to sniff at, and money for good treats. Drop me a line. Just please don't be a Dane or Leonberger or Wolfhound yet--I haven't got the room. Someday!

Happy Boxing Day (which to us was, of course, 'Sleep and Eat and Play with New Things' Day, beloved to us both). I love you, you pest.